Incredible! Astounding! Death-defying! No, not the story. I’m talking about the fact that I managed to read the issue cover to cover.

Four of the creators from the last issue are back, with Rick Parker taking over lettering duties from Joe Rosen. Seeing as how Rosen was the one bright spot in #84, my hopes weren’t high.

Web of Spider-Man #85 starts out ……whoa!……déjà vu…….right where #84 started: The Kingpin, in his tightie-whities, getting some exercise. Can’t this guy afford some sweat pants?! This time, however, Mr. Fisk is knocking around his son Richard. The Kingpin wants the Rose dead, apparently oblivious to his son’s involvement.

Peter and Mary Jane Parker return home to find their apartment has been redecorated with a dead man lying next to their bed. Peter sees his Spider-Man costume lying on the bed and wonders as to who may know of his alter ego.

With the exception of the Rose and Hobgoblin, the rest of the issue is a veritable parade of “Characters unimportant enough to not make the Marvel Encyclopedia.” Slimy Daily Bugle photographer Nick Katzenberg continues to hound the Parkers. The Triad Brothers jump the Parkers in a generic New York alley using their special energy beam swords (yes, it’s as lame as it sounds). Spider-Man and the brothers manage to topple a building—odd, considering I’ve seen less destruction from the Hulk—and Mary Jane punches out Katzenberg. Spider-Man scours the city trying to figure out who has the hit out on him. The Triad Brothers get beat up again, then are confronted by a masked man named Deathwatch who explains he (or an extremely buff “she”) is very disappointed with them. Apparently Deathwatch represents all of the readers.

Howard Mackie’s script is still weak and Alex Saviuk, Keith Williams and Bob Sharen continue to wonder how they were lucky enough to land this gig. The good news: Rick Parker knows how to letter. The bad news: He had to letter the tagline on the last page: “Next: The Hobgoblin! Be here as “The Name of the Rose” REALLY heats up.” 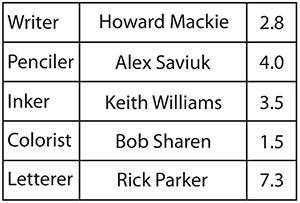