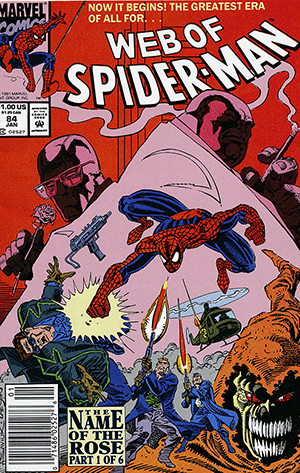 “Now it begins! The greatest era of all for Web of Spider-Man.”

So states the cover of Web of Spider-Man #84. I’ve never been a fan of hyperbole, especially when it muddles an already cluttered cover. Penciled by Alex Saviuk and inked by Erik Larsen, Spider-Man takes center stage. He battles generic sunglasses-and-trench-coat-wearing minions while a weak rendition of a Bell UH-1 Iroquois chopper swoops in for added drama. Hobgoblin’s mug is included almost as an afterthought. The entire mess is watched over by the Rose and the Kingpin. From a designer’s standpoint, the cover practically vomits all over itself.

The story starts out with the basic Marvel formula: one of Marvel’s characters is engaged in battle, but we discover by Page 2 that this is merely a training exercise and nothing more. The Kingpin is getting a workout while his son Richard looks on. Unlike the X-Men’s Danger Room, however, the Kingpin manages to snap the neck of one of his lackeys. And while we’re on the topic of exercise, how is it possible a man supposedly as nimble and active as the Kingpin still manages to perpetually hover around the quarter-ton mark? Surely he would have dropped some weight by now!

“Excuse me, Mr. Kingpin, sir,” the butler says, “your seven six-foot sandwiches are here from Subway.”

“Dang! I can’t understand why this isn’t working for me. It worked for that Jared fella,” the Kingpin says.

“Right you are, sir. Did you also want the 10 liters of Coke sent up?”

One can only assume that even though we can see out of Mr. Fisk’s office windows, they are tinted so as to keep onlookers with binoculars from witnessing murder.

Howard Mackie’s story is insipid at best. After the scene at Fisk’s office, we catch up with Spider-Man dealing with a thug on school grounds. The dialogue is fairly weak and unimaginative, but that’s okay since the artwork is equal to the task. Peter meets up with his wife and the two go to Aunt May’s house for dinner. Saviuk’s rendition of Aunt May misses the mark. May is Peter’s aunt, not his great-great-great-great-great aunt. Saviuk’s interpretation pushes May Parker about 20 years beyond old and decrepit.

The story cuts back and forth between the characters, with the biggest mystery revolving around whether or not Peter will get to read today’s edition of the Daily Bugle. It’s apparently important that he does so as the other characters in our little production seem to be perturbed by what they’ve read.

Richard Fisk has been in contact with the Rose and the two have big plans which might be upset by whatever story is in the paper. The Parker’s apartment is ransacked with one of the hoodlums making a discovery of some importance. Before he has a chance to reveal what he found, another hoodlum blows him away. It’s important to note here that a handgun (with a silencer, no less) manages to blast him backward about 10 feet. It must have been a cross between a Walther PPK and a cannon.

A battle ensues on Aunt May’s property between the lackeys and Spider-Man. Again, Saviuk struggles to create different-looking bad guys, as they all appear to be clones of each other, but with different hair color. Maybe that’s a big part of the story … or maybe it’s not. The web-slinger remarks that these guys are no amateurs after the helicopter arrives with even more baddies. You would think well-funded criminals would at least have a chopper that wasn’t built in the Vietnam era. They must have gotten a good deal on it.

Spider-Man wins the battle, but the Rose informs Richard about some incriminating evidence he has on Parker. We assume it is Spider-Man’s secret identity.

Peter finally gets to see the paper where it is revealed that there is a photo essay coming soon exposing New York’s underworld, with the photo credit going to Peter. He tells Mary Jane he is not responsible for the photos.

Mackie’s plot lacks oomph. Saviuk struggles to create excitement with his layouts, although a couple of panels were quite well rendered. Keith Williams’ inking can be a bit heavy-handed at times, especially with separating the foreground elements from the background. Bob Sharen’s colors seem hodge-podge, but there is a purple theme throughout, perhaps as a nod to the color of the Rose’s mask.

Joe Rosen’s lettering is the bright spot in the issue. It is clean and flows well, not taking attention away from the story. At times, though, I wished it would. 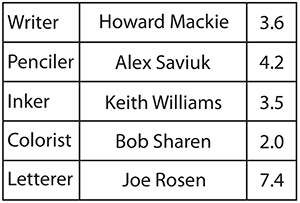